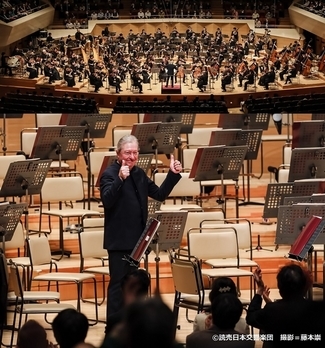 Yomiuri Nippon Symphony Orchestra (YNSO) has been awarded the Grand Prize of the 77th Agency for Cultural Affairs National Arts Festival by the Minister of Education, Culture, Sports, Science and Technology in participation of the Kanto region performances.
The performance awarded is the Subscription Concert No. 622 on 25 October 2022 in Suntory Hall, conducted by YNSO’s Conductor Laureate Sylvain Cambreling with Tatsuki Narita (violin) and Hidejiro Honjo (Shamisen) as soloists.

The Agency for Cultural Affairs stated the reason for awarding as follows:
“In this concert, conducted by their Conductor Laureate Sylvain Cambreling, the ambitious program which connected the 20th century through today stood out with two works by Debussy, Varèse which required a huge orchestra, and the new work “Double Concerto for Violin and Shamisen” by Toshi Ichiyanagi whose sudden passing shocked everyone. Maestro Cambreling’s sharp and refined conducting created music so clear, vivid, and full of color. Especially overwhelming was Varèse’s Arcana, precisely controlling the piece’s various colorful sounds.”

Hearing this news, Mo. Cambreling gave us the following message:
“I am delighted and proud to hear the news that we have been awarded the Grand Prize of this year’s Agency for Cultural Affairs National Arts Festival. I would like to congratulate all the musicians of Yomiuri Nippon Symphony Orchestra as well as our dear audience who came to our concert. Very happy to be sharing this joy with you all!”

The Agency for Cultural Affairs National Arts Festival is a historic art festival, held every autumn since 1946 with aims to provide opportunities to wider public to experience great arts as well as advancing and developing arts and culture in Japan.